Accommodation
You are here:
Holiday in the centre of South Tyrol   -
Gourmet and culture   -
Churches, chapels and convents in the Eisack Valley

Churches, Chapels and Monasteries in the Isarco Valley

Ecclesiastical architecture and mystical places in the Valley of Trails

In terms of church history and ecclesiastical architecture, South Tyrol holds a special position in the German-speaking area – for the land south of the Brenner Pass was already Christianized by the time of St. Augustine. From the beginning, the center of the church was in the Isarco Valley, along the route between Rome and the Germanic north. Up until 960 AD, the episcopal see was in Säben above Chiusa; the seat of the powerful prince-bishopric that followed was located in Brixen, where you can still marvel at the diocese cathedral and its cloister today.

In the Isarco Valley you’ll find attestations to all the great periods of art, ranging from late antiquity remains in Säben to the early and high Romanesque, Gothic and Baroque. Ecclesiastical architecture in South Tyrol has also been shaped by classicism and historicism, culminating in the ecclesiastical buildings of the late twentieth century. The frescoes, apses, sculptures and winged altars in the churches, monasteries and chapels evidence this long and rich history. City tours and culture-themed tours provide information about and insight into and the different epochs.

Mountain chapels like the little Church of St. Magdalena in Viums or the Church of St. Margaret in Schabs, are nestled into the landscape in quite an aesthetically pleasing way. Particularly popular attractions include Dreikirchen (lit: Three Churches) in Barbiano/Barbian and the spectacularly situated little Ranui church in Funes/Villnöss draws hikers and culture lovers alike under its spell – a place of power. The two abbeys, Säben and Neustift, are among South Tyrol’s most important cultural assets. 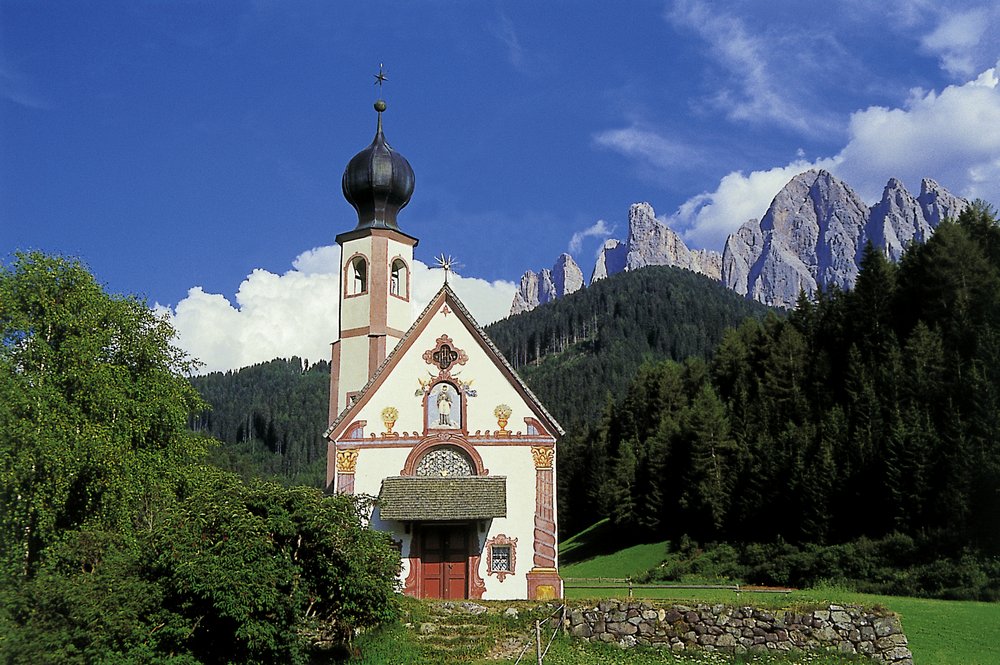 … that in Laion alone there are ten churches and chapels?